I have been enamoured with one magazine for several years now. This love affair with Cloth Paper Scissors started slowly, smoldering as my collection of issues grew, and finally engulfed me after I gave birth to my eldest daughter, Quinlyn. I nursed her on demand, and she demanded so much that she was 26 pounds by 6 months old, and I felt literally trapped under a baby most of the time. I longed so much to work on my art, but never really had the energy, something that most people who know me will never hear me admit. I normally have oodles of energy! The time was bittersweet, since I loved my baby and most parts of being a new mother, but I missed my freedom. Making art is up there with the things that I need to do to live, like breathe and eat. I am not me when I am not being creative. I had some commitments, to a gallery show here and there, and I made what I could, but it was not nearly as much as I was used to. So, I decided if I couldn't physically make as much art as I wanted to, I would be creative in other ways, such as by cooking, photographing my baby, and by reading, reading, reading about techniques I wanted to try. The cooking and photographing came easy, as did the devouring of new techniques, but it was sheer agony not to be able to actually make much. The magazines that I spent the most time reading and rereading, next to Mothering and Vegetarian Times, were Cloth Paper Scissors and Somerset Studios. It was at that time that I made myself the goal of bring published in a magazine. As a photographer I had been featured in several newspapers. And since then, I have had work in Filament, Highline, and PhotoEd Magazines, as well as in the book, 1,000 Ideas for Creative Reuse. All awesome but my heart skipped a beat the day I received my advanced copies of the 37th Issue of CLOTH PAPER SCISSORS, the one that I wrote the Workshop article on Fuji film transfer processes for. I am so happy, proud, amazed (I am still pinching myself that I have been working with the amazing people at Interweave!!) and excited. I own every single issue of this magazine, I even has my mixed media quilt, I Need Your Kindness, appeared in the Muse Flash section several issues ago, but now I am one of only a small number of artists who have shared their knowledge in a Workshop article. CPS even challenged me to make a video of the technique to go with the article. I am on cloud nine. Thanks so much, CPS, Jenn Mason, & Barbara Delaney! 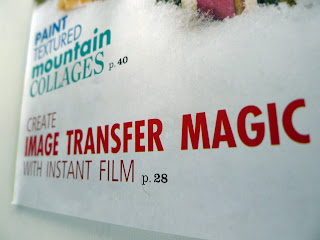 I have worked with Fuji and Polaroid film processes for over 10 years. I have always wanted to write about it... 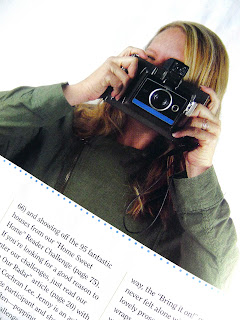 I love this image of Editor, Jenn Mason, with her vintage Polaroid Land Camera from Ebay... 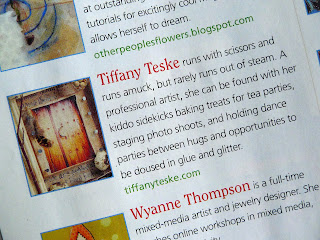 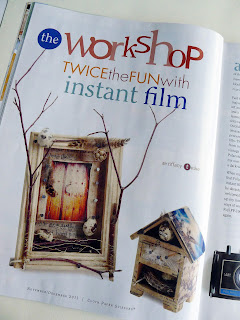 Page one of the article, with two assemblages I made to accompany it.
Posted by Tiffany Teske at 10:44 PM No comments: Links to this post