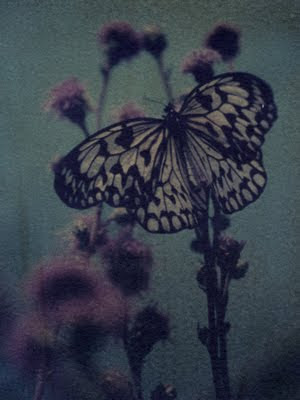 Number One in my Flutter Series
image by Tiffany Teske

Available for purchase here...
Posted by Tiffany Teske at 9:25 PM No comments: Links to this post 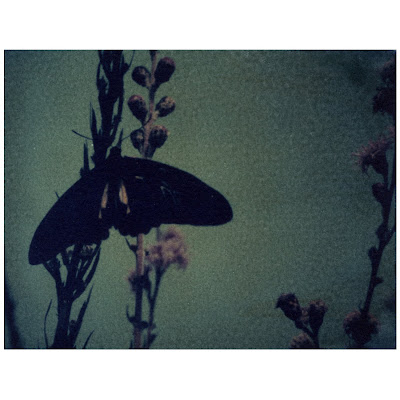 Number Two in my Flutter Series
image by Tiffany Teske

Available for purchase here...
Posted by Tiffany Teske at 11:05 PM 2 comments: Links to this post 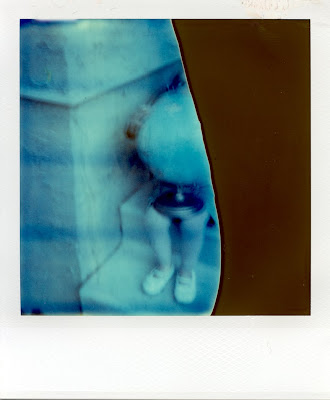 I took this image of my daughter while testing a "new" old camera and some expired
SX-70. I have traveled the globe much more than my parents have and I can only imagine my daughter will be more "global" than I... 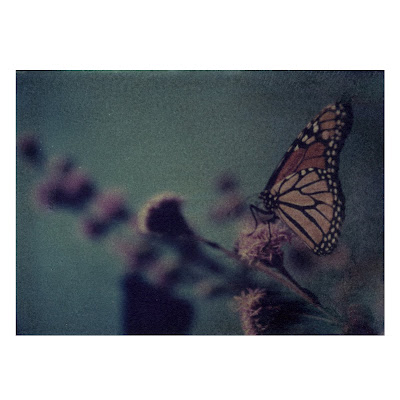 This summer, I was invited to be part of an exquisite corpse. It is really not as creepy as it sounds. It began as the parlor game "Consequences" and was later used by the Surrealists on the 1920s. The written version involves passing around a sheet of paper upon which each person makes an contribution then folds the paper to conceal part of what is written before passing it to the next person. Later this game was used with both drawing and collage, with the paper being folded in thirds and each person contributing based on seeing very little of what is above or below. Our project was quite different from these examples... 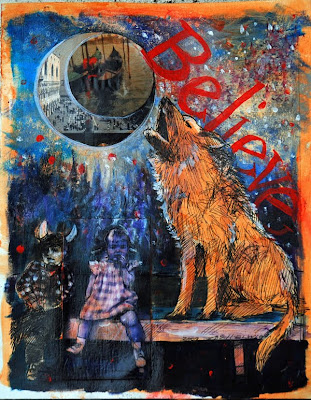 Believe or Wolfwig Dreams of Venice by Alice Helwig

I was asked by Calgary painter, Alice Helwig, to be part of her exquisite corpse. She created the first piece, the collage above, and then sent a color photograph of it to the next artist, who had two weeks to create a work based on what they received. We were also given a theme to work within. The other artists who participated were Simon Wroot, a metalsmith, Barb Fyvie, a painter, Susan Thorpe, a potter, and Susannah Windrum, a metal worker, mixed media painter, and arts administrator. I work mostly with photography and mixed media. A diverse group, to be sure.

I will not post all of the contributing artists' work here, since Alice did an amazing job of explaining our project and showing each piece along with an artist's quote on her blog. I chose to create a collage. Below you can see images of it and read my statement about my process as well as the materials I used. 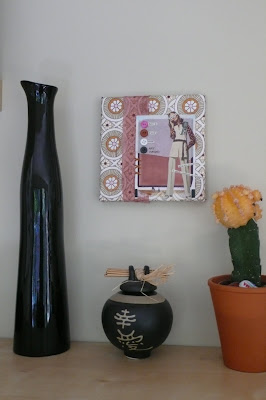 Title: The Imagined Illusion of Balance
This is the 5th piece in the series.

Process: I thought about the theme, “the joys and difficulties of being an artist”, before I received Simon’s piece, so I must say I was more influenced by it, than by Simon’s amazing work. For me, as the mother of a three year old and four month old daughters, finding the time to make art is always a challenge. A natural night owl, I generally toil in the latest hours of the night or wee hours of the morning, with my youngest child strapped to me, sleeping. I spend my days thinking about when I will be able to make art, while I am cooking, cleaning, caring for my kids, and trying to do a bit of crafting. As any artist, making art is like breathing so I need to do it. I am infinitely happier, as well as more patient, when I have had time to create. 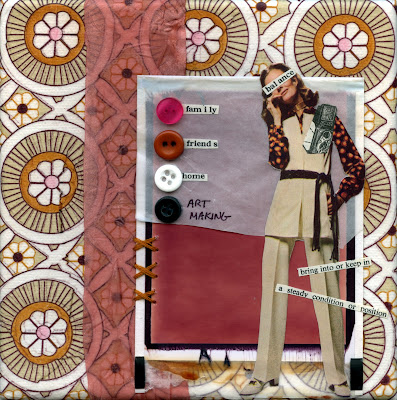 The Imagined Illusion of Balance by Tiffany Teske

I wanted to make something light hearted to convey my thoughts on trying to find balance amongst the important things in my life and my challenge to find the time to make art. I decided to work on a collage, which is usually something I can create in one sitting, however, this one took me several days of thinking, arranging, viewing, rearranging… I usually start with a vague idea of what I want to accomplish and a pile of materials with which to make it all happen. In this case, I started with a small canvas, 6x6”, and a paper napkin that I brought home from a BBQ (I am a bit of a magpie). The paper has a repeating pattern which reminded me of clocks. The color palette of brown, pink, gold, beige, and white is lovely. The ribbon was added to remove some of the business of the background. The Polaroid had to be added because in most of my photography and art I work with Polaroid. It is blank to act as a backdrop to the woman, but also to put her in “the box”. But, as you can see, both her feet and head are not actually in the box, and the way her head is tilted in thought helps to illustrate that she is in fact thinking “outside of the box”. The “balance” text over her eyes makes her more universal, less individual, but also illustrates she is blinded by her constant thoughts of trying to be balanced. The definition of balance is hovering in an unbalanced state over her. The camera is over her heart both because of her love for creating with it but also because her need to use it is like her need to have blood pumping through her heart. The buttons are like bullets in front of items on a list, but are also fasteners, and the list is of things most important to her. The stitching binds her to these things. “Art Making” is hand written to distinguish its special place of importance on the list. I chose the title because this woman seems to have it all together when people look at her, but in reality, it is all an illusion. Like everyone else, she does the best she can, but makes no secret about her inability to find true balance between all that she loves and needs.

Four of the artists, including myself, met in early October to show our work to one another and to bind the images and text about each piece into a book. I had not met any of these artists in person, so it was great to have known Alice via the web, and then through her to meet these other amazing artists. One of them lives in the next town and she and I plan to work on more projects in the future, hopefully with new artists and artists from this group. The works from our exquisite corpse were on display for the month of November at the Calgary Jewish Academy.